The Seneca County Sheriff’s Office is currently investigating an act of animal cruelty where a pit bull male puppy was found tied to a tree in a remote wooded area near the Route 31 Bridge in the Town of Tyre on May 9, 2019. It appears that the suspect(s) tied a rope tightly around the neck of the puppy and tied him to a tree with no food or water. Luckily, a good Samaritan heard the dog barking and contacted 911 after supplying the puppy with water. A Sheriff’s Deputy responded to the scene and contacted Beverly Animal Shelter for further assistance. The puppy is currently in good health and it appears that he was found relatively soon after the suspect(s) left him at the scene.  If anyone has any information on the identity of the puppy or the identity of the suspect(s), please contact Lt. Thompson by phone at (315) 220-3449 or the Criminal Investigation Division by phone at (315) 220-3240.  Calls may remain anonymous. 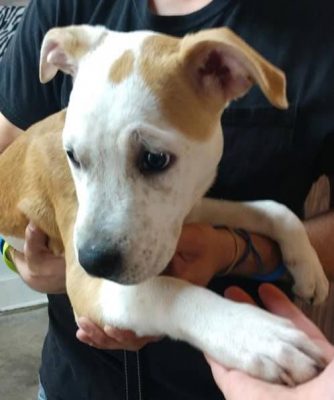 Actual photo of the puppy.