On December 26th 2018 at around 3:50 PM Seneca County Sheriff Deputies responded to  the Petro at 1255 State Route 414 for the report of a vehicle that had been driving erratically while on the NYS thruway I90 and almost struck a parked car at another location.  Deputies were able to locate the suspect vehicle and spoke with the driver who was identified as 58 year old Daniel Kavanagh of 1741  Stanley St Cazenovia NY.  After further Investigation Deputies arrested Kavanagh for DWI ,and  Aggravated DWI.  He was taken to the Seneca County Law Enforcement Center for processing and released on appearance tickets.  Kavanagh is to appear in the Town of Tyre Court on January 16th 2019 to answer to the charges.

12/24/2018: Seneca County Sheriff’s Office Investigators have located and interviewed the driver of the involved vehicle from the suspicious incident that occurred on December 12, 2018, on South Main Street, in the Village of Ovid. Investigators have determined that this incident is not related to the reported attempted abductions in Geneva. It appears at this time that the Ovid Incident was a misunderstanding exasperated by a language barrier. Sheriff Luce extends his thanks to the many citizens that stepped up to assist in this case by providing information and added safety measures for area children. The Sheriff urges all citizens to continue to immediately report any suspicious incidents of this nature so that they can be investigated in a timely manner.

The Seneca County Sheriff’s Office continues to investigate the suspicious incident that occurred on December 12, 2018 at or about 11:15am on South Main Street in the Village of Ovid. Sheriff’s Investigators have discovered that the suspicious vehicle was a tractor trailer with a maroon power unit and a white trailer with the words of “E-Way Express LLC” on the side. E-Way Express is a nationwide company that is based out of the State of Missouri and Investigators have been in communication with their ownership to determine who the driver was at the time of the incident. The following pictures are also being distributed to the media in an attempt to assist Investigators in determining who the driver was. The male driver was described as a Hispanic male with short brown hair, blue jeans, white t-shirt, and an orange/reddish-colored jacket. Initially, the tractor trailer drove southbound on Main Street through the Village of Ovid and drove northbound through the Village of Ovid about fifteen minutes later. If anyone has information on the identity of the driver, they are urged to call the Seneca County 911 Center at (315) 539-9241. The Sheriff’s Office would like to urge citizens that no criminal charges have been lodged at this time and ask the public not to confront the driver if encountered. If a tractor trailer similar to the one depicted is encountered, the Sheriff’s Office asks that you relay the license plate number, description, and location to authorities. The investigation is ongoing and Investigators are only seeking to interview the driver at this time. 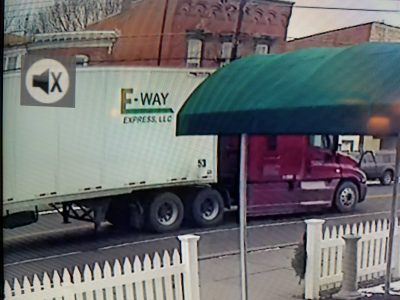 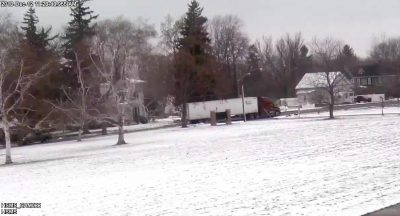 The Seneca County Sheriff’s Office reports that on 12/20/2018 at about 11:00 am, the Road Patrol and Investigators arrested Felix Cruz ,30, of 4455 Co Rd. 50 Canandaigua N.Y. for one count of Failure to Change Address as a level 3 sex offender. This is in violation of the Corrections Law Sex Offender Registration Act.
Investigators report that on November 25th 2018 they were notified that Cruz moved from his residence on 11/21/18 in the Town of Waterloo. After ten days Cruz did not change his address with the Seneca Co. Sheriff’s Office and an arrest warrant was issue on 12/5/18. Cruz was arrested by Ontario Co. Sheriff’s Office at 4455 Co. Rd. 50 the D&D Motel in Canandaigua and turned over to the Seneca Co. Road Patrol division. Cruz was taken to the LEC to await CAP Court for arraignment.

The Seneca County Sheriff’s Office is currently investigating a suspicious incident that occurred on December 12, 2018 at or about 11:15am on South Main Street near the South Seneca Jr./Sr. High School in the Village of Ovid. A twelve year old male reported that he was approached by a Hispanic male with short brown hair wearing blue jeans, a white shirt, and an orange /reddish-colored jacket. The Hispanic male allegedly attempted to engage the twelve year old male into conversation and it appears that he tried to lure him into a box van. The box van was described to be burgundy-colored in the front and white in the back with green lettering with a big upper case letter of “E” that stood out to the child. The Sheriff’s Office is working closely with the South Seneca Jr./Sr. High School and Interlaken Police Department.

Sheriff’s Investigators are also working closely with members of the Geneva Police Department to determine if their recent rash of events are connected.

Sheriff W. Timothy Luce would like to remind residents to be vigilant, be aware of their surroundings at all times, and avoid walking alone. Sheriff’s Deputies and Investigators will be providing an added presence during the school dismissal. Citizens are urged to call 911 to report any suspicious activity.

There was a significant delay in the reporting of this incident to the Sheriff’s Office which explains the reason for the media release on today’s date.

Seneca County Sheriff’s Office reports that on December 11th 2018 Sheriff’s Investigators arrested Bruce A. Denmark, age 40, of 2874 Darling Rd. Lodi, NY. Denmark was taken into custody following an investigation of the sexual abuse of a child. It is alleged that Denmark subjected a 13 year old female victim to sexual contact starting in 2013. During the course of the investigation, information was also uncovered regarding the physical abuse of a 13 year old male which is alleged to have occurred in 2018.
Denmark was arraigned in the Centralized Arraignment Court before Justice Erway on one count of Sexual Abuse in the 1st degree and two counts of Endangering the Welfare of a Child at which time he was remanded to the custody of the Sheriff in lieu of $2,000.00 cash bail or $4,000.00 secured bond. Class A orders of protection were issued on behalf of the three victims and Denmark was scheduled to return to the Lodi Town Court at a later date to answer the charges.

The Seneca County Sheriff’s Office reports, on December 18th, 2018, members of the Narcotics Unit charged Kyle G. Clawson and Meredith J. Bell of Seneca Road, Lodi, New York with Criminal Possession of a Controlled Substance in the second degree, a class A-II Felony. The arrest stemmed from a search warrant at their residence on November 12th, 2018. A laboratory analysis of the evidence obtained resulted in the charge. It is alleged that both Clawson and Bell possessed approximately 6 ounces of methamphetamine. They were arraigned at Centralized Arraignment Court where they were committed to the custody of the Sheriff on no bail. A preliminary hearing date is scheduled for December 21st, 2018 at 5:30PM at the Town of Lodi Court.

The Seneca County Sheriff’s Office reports that on 12/19/2018 Investigators arrested Scott P. Davis,29, of 1390 Middle Black Brook Rd. Seneca Falls N.Y. for one count each of Rape in the second degree, Criminal Sex Act in the second degree (both class D Felonies) and Endangering the Welfare of a Child.
Investigators report that in September 2018 they began an extensive investigation into alleged sexual abuse accusations involving Davis. During the course of the investigation it was discovered that Davis had oral, anal and vaginal sexual relations with a 13 year old female in the Town of Tyre and throughout Seneca County on numerous occasions and in many locations starting in 2010 and continuing through 2013. This resulted in the Rape 2nd and Criminal Sex Act 2nd charges. It was further discovered that in the end of 2017 into 2018, Davis had inappropriate sexual conversations with a 9 year old female in the Town of Tyre leading to the Endangering the Welfare of a Child Charge. Davis was arraigned on 12/20/18 at 8am in the Seneca Co. Central Arraignment Court in front of Justice Duffy. Davis was remanded to the Seneca Co Correctional Facility in lieu of $10,000 cash bail or $20,000 insured bond. Davis will appear in the Town of Tyre Court on 12/24/18 at noon for a felony hearing.
Investigators report that the investigation is ongoing. Additional charges are possible pending further investigation. If anyone has any information pertaining to this criminal investigation please contact Investigator John Nesbit of the Seneca Co. Sheriff’s Office at 315-220-3442.

The Seneca County Sheriff’s Office reports, on December 14th, 2018, at approximately 8:45AM, Investigators arrested Raymond J. Tortorello, age 30, formerly of 312 Gravel Road, Seneca Falls, New York.  Tortorello was charged with Criminal Mischief in the second degree, a class D Felony, and Petit Larceny, a class A Misdemeanor. It is alleged that Tortorello caused extensive damage to a residence that he was renting and also stole a wood stove.  Tortorello is being held at the Law Enforcement Center awaiting arraignment at centralized arraignment court.  Investigators were assisted by Officers from the Seneca County Probation Department and Cayuga County Probation Department.

HIGHLIGHTS OF THE MONTH:

November 4th, 2018: Deputies responded to a violent Domestic Incident in the Town of Fayette. A woman was choked in front of a 5 year old child. The suspect was apprehended without incident.

November 5th, 2018: An inmate in the jail was charged with a felony after allegedly spitting blood into the face of a Corrections Officer.

November 12th, 2018: After a lengthy investigation involving undercover work and a search warrant NARCO took down a Meth Lab in the Town of Lodi. Drugs, Meth making items and firearms were seized. Two suspects were arrested.

November 20th, 2018: Investigations charged a registered sex offender in the Town of Lodi for not updating his information.

November 21st, 2018: Two suspects were arrested for Welfare fraud in the Town of Covert.